I actually got the results back some time ago, but with one thing and another, haven't had the time and energy to post. The committee had some very kind things to say about my work, as well as pointing out some weak spots. I have to resubmit two swatches, but not the ones I feared, funnily enough. I also have to rewrite the pattern I submitted.

What I do well: good tension, although with some weak spots in the edge stitches, particularly on the purl rows. They found the written work good (just as well, given the amount of time I put into it!).

What I need to work on: transition tension in ribbing, tension in the edges, measuring, making sure that swatches are square. They also pointed out my gauge varied in the hat, with the gauge at the top being smaller. I'm not sure if that was due to my blocking, or whether my gauge changed when I switched to two circular needles from one. It's something to look out for, anyway.

I was impressed at the amount of detail they went into with the comments. Even though almost all the swatches were accepted, they still said what was good and weak about each one, with tips on how to correct the weak areas. And those swatches I have to resubmit? I managed to twist the increases on swatch 5 and the decreases on swatch 7, which are clearly visible when I look at the swatches. I guess I was in "I have to get this out" mode, and didn't step back and look at the details. I'm planning on knitting those in the next week or two, rewriting the pattern, and sending it all off. Then I'll take a break before Level 2 as I will need to practise things like stranded knitting and intarsia first.

I finally got around to getting the swatch photos off my camera, and doing the minor colour correction and cropping needed to put them online. So here you are, documentary evidence. The swatches were the most interesting part of the whole thing, I thought, so it wasn't a big problem to reknit them as required. Except for the seed stitch swatch, number 3, which was a slog.

Today was the day I finally shipped the TKGA Master Hand Knitting Level 1 box off to Zanesville, Ohio. I opted for the 10 business day postal dlivery at $21 rather than the 1 day at $90+, given that it will take 6-8 weeks for me to get the results anyway. So that means I can tell myself the day of reckoning won't be until late August or even early September. I wonder what the customs handlers will think of a declaration of "knitting swatches"?

I took photos of each swatch and the hat, and will post those later. Fortunately Ravelry now allows for slurping from my blog so I don't have to clutter up my Flickr feed with project photos. There were a lot of swatches, but those were fun (even if I did have to do a lot of practice swatches). Except for the seed stitch swatch, which was not fun.

The report on blocking was fine. I found the questions difficult to answer, since so much of what I do is because it feels right (using the intuitive side of my brain) and having to come up with the right words for explanations was a little tricky. I felt like I was trying to explain what I see, and wasn't sure whether I found the right vocabulary. Time will tell, I guess.

Anyway, so Level 1 is more or less done. I have no idea whether I'll pass or need to resubmit any of the swatches. If so, I hope the feedback is something I can understand and incorporate in the reknitting process, something to learn from.

At some stage I'll probably do the next level, but for now I have a few other projects in the queue.

For some reason I can't sleep right now, and after browsing a few Ravelry pages I figured I may as well update my Level 1 progress. I was hoping to get the whole thing finished by the end of this month, which will be a little tight, but if I tell the world, that will help me stick to the timetable, right? Maybe?

I have the blocking report almost done, just proof-reading to go. I'm not worrying about the details too much on this one, it's probably not my finest writing but I figure if all the useful information is there, that's the important thing.

I have knitted and blocked the hat, just need to sew on the i-cord loops. I've knitted all the swatches, and blocked all but two. Except for, someone on Ravelry asked about doing traditional versus modified SSK decreases, and the answer was to do the traditional method (the one where you slip both as if to knit, whereas I usually slip the second stitch as if to purl), so I'll have to reknit that swatch.

The major remaining items are to write up the cable pattern, answer all the questions, and fill in the tags for each swatch with the pattern information. In theory it's doable by the end of the month, let's see if I actually manage it. Getting over my insomnia would help.

Yesterday was the time to start blocking some of those TKGA swatches I've been knitting. I haven't finished all the swatches, but I've done over half and didn't want to leave all that pinning out to the last minute. It's been a lot of work so far, but worth it in terms of making me look closely at my knitting and figuring out better ways to do things.

I used the standard wool blocking technique: soak in some warm water with a little shampoo for 20-30 minutes, rinse in warm water, squeeze out gently, wrap in a towel, pin out on a towel placed on one of those interlocking foam boards, leave until dry. This evening I get to weave in some yarn tails. Maybe I'll do some more photos of the results once that's done. 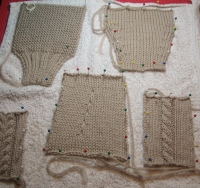 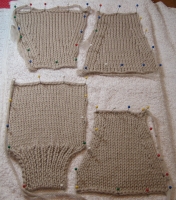 All original content on this site is copyright © Lauren Wood.

This work is licensed under a Creative Commons Attribution-NonCommercial-NoDerivs 2.5 License.